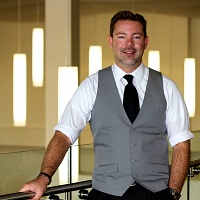 Thanks for visiting us here at the Grand Theatre. We pride ourselves on being the “Community’s Professional Theatre.” In which we are committing to the community to provide exceptional theatre filled with local artists at an affordable price.

By working with local talent we are able to celebrate our Community and provide an exceptional theatrical experience for our audiences all while committing to presenting productions that will entertain and engage our audience in new dynamic ways.

As you enjoy our productions please remember to spread the word, it is because of amazing patrons like you that we exist as we continue to bring you the best our community has to offer.

We look forward to seeing you soon! 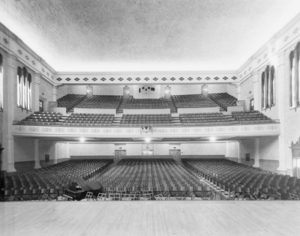 South High School opened in the fall of 1931 and served the community until its closure in 1988. During that time, the school graduated nearly 35,000 students under the administration of only four principals. The closure was controversial and broke the hearts of many of its former students.

Salt Lake Community College purchased the property from the Salt Lake School District a year later with the intention of using it as a city campus. After another year of renovation, portions of the building were opened as the SLCC South City Campus, retaining part of its former name in recognition of the school’s history. During the renovation, Pat Davis, an employee of SLCC and formerly the Executive Director of Promised Valley Playhouse in Salt Lake City, was brought to the school’s old auditorium. “What a grand theater!” she exclaimed, and the name stuck. The first Grand Theatre performance was “Promised Valley” and was held in the football stadium in 1989, but the first “official” production held in the Grand Theatre auditorium was Camelot featuring Robert Peterson

In 1995, the Theatre introduced a fundraising campaign called “Take a Seat!” The premise was to raise money for new theater seats by asking the community to pay $200 per seat; a brass plaque in that donor’s name would be attached to the armrests. Two little ladies from the South High Class of 1942 approached the SLCC Development Office with a proposal that their class purchase a seat. The only hitch was that they needed a little help to get it done. It wasn’t long before members of the Development Office, with the blessing of College President Frank Budd, were discussing the possibility of helping this group of alumni form an association which would not only benefit the thousands of displaced Cubs but SLCC, as well. That spring, the College hosted a group of notable alumni from the community at a luncheon held on the stage of the Grand Theatre. The idea of an alumni association was proposed and gladly accepted.

One of the goals of the Association states “Work in cooperation with the staff and administration of Salt Lake Community College in the growth and renewal of this great facility”. While there is vested interest in the entire structure, one area of the campus has remained structurally unchanged throughout the building’s history: the Grand Theatre. Once the school auditorium and now a premier community theater, the Grand Theatre not only thrills audiences with its performances, but helps returning South High alumni recall an earlier day.